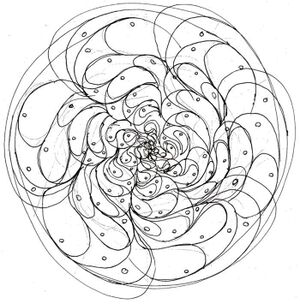 An example of a form constant.

Form constants are one of several geometric patterns which are recurringly observed during hallucinations and altered states of consciousness. Form constants can be categorized into four types: lattices (including honeycombs, checkerboards, and triangles), cobwebs, tunnels, and spirals.[1]

Form constants appear in near-death experiences and sensory experiences of those with synesthesia. Other triggers include psychological stress, threshold consciousness (hypnagogia), insulin hypoglycemia, the delirium of fever, epilepsy, psychotic episodes, advanced syphilis, sensory deprivation, photostimulation, electrical stimulation, crystal gazing, migraine headaches, dizziness and a variety of drug-induced intoxications. These shapes may appear on their own or with eyes shut in the form of phosphenes, especially when exerting pressure against the closed eyelid.

It is believed that the reason why these form constants appear has to do with the way the visual system is organized, and in particular in the mapping between patterns on the retina and the columnar organization of the primary visual cortex. Concentric circles in the retina are mapped into parallel lines in the visual cortex. Spirals, tunnels, lattices and cobwebs map into lines in different directions. This means that if activation spreads in straight lines within the visual cortex, the experience is equivalent to looking at actual form constants.[2]