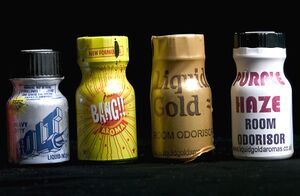 A selection of poppers

Alkyl nitrites (also known as poppers) are a class of volatile liquid substances whose fumes are inhaled for recreational purposes, particularly in preparation for sexual activities.[1] They are known for producing intense but short-lived muscle relaxing effects that start after about 15 seconds and last for up to 3 minutes.

The most common method of administering poppers is to open the bottle, hold it under one's nostril, and inhale. Other methods of popper usage such as oral use are extremely dangerous and can potentially result in death or coma. It is worth noting that alkyl nitrites burn the skin on contact and are extremely flammable.

Poppers are chemicals known as alkyl nitrites. These are chemical compounds of structure R–O-N=O. In more formal terms, they are alkyl esters of nitrous acid. Alkyl nitrites are inhalants, meaning they have very low vapor points and become airborne almost immediately at room temperature.

The first few members of the series are volatile liquids; methyl nitrite and ethyl nitrite are gaseous at room temperature and pressure. Organic nitrites are prepared from alcohols and sodium nitrite in sulfuric acid solution. They decompose slowly on standing. The decomposition products are oxides of nitrogen, water and the alcohol as well as polymerization products of the aldehyde.

The pharmacology of alkyl nitrites is not yet fully understood, but the primary mechanism by which they exert their effects is believed to be by reduction to nitric oxide which functions as a gasotransmitter (a gaseous neurotransmitter) in mammals which causes the relaxation of smooth muscle. Veins and arteries are mainly composed of vascular smooth muscle and by releasing nitric oxide, poppers cause dilation of veins and arteries, lowering blood pressure and allowing blood to be pumped around the body at a greater rate.[3] The relaxation of smooth muscle tissue in the vagina and anal sphincters is one reason for the use poppers during sexual activity with users aiming to facilitate easier penetration.

There are currently no anecdotal reports which describe the effects of this compound within our experience index. Additional experience reports can be found here:

The 2005 Merck Manual of Diagnosis and Therapy reported that there is little evidence of significant hazard associated with inhalation of alkyl nitrites.[1] A study and ranking of drugs for harmfulness devised by British government advisers and based upon health professionals opinions of harm to both individuals and society placed alkyl nitrites among the less harmful substances when compared to other recreational drugs including alcohol and tobacco.[7] The primary risk of popper usage is a chemical burn if spilled on one's skin.

All forms of alkyl nitrites are highly flammable and should not be used if one is smoking or has candles nearby.

Alkyl nitrites are a possible and rare cause of concern in a small number of cases of maculopathy (eye damage) in recent case reports from UK and France.[8] Some studies have concluded that there may be increased risk for at least temporary retinal damage with habitual popper use in certain users; in a letter to the New England Journal of Medicine, an ophthalmologist described four cases in which recreational users of poppers experienced temporary changes in vision.[9] Another study described foveal (daylight vision) damage in six habitual poppers users.[10] In 2014, optometrists and ophthalmologists reported having noticed an increase in vision loss in chronic poppers users in the UK associated with isopropyl nitrite being substituted for isobutyl nitrite in 2006.[11][12]

The only consistently safe route of administration used with poppers is inhalation. Oral use of the liquid can prove fatal enough to result in a lethal dosage.[15][16] It is near impossible to overdose through the conventional use of poppers.

An overdose via oral ingestion (rather than inhalation) may result in cyanosis, unconsciousness, coma, and even death. Methylene blue is a treatment for methemoglobinemia associated with popper use.[16][17][18][19] Accidental aspiration of amyl or butyl nitrites may lead to the development of lipoid pneumonia.[16]

There is no real tolerance to be gained through popper use. They are considered to have little to not addictive potential.

Alkyl nitrites are interactive with other vasodilators like sildenafil (Viagra, Revatio), vardenafil (Levitra), tadalafil (Cialis, Adcirca) and nitroglycerin to cause a serious decrease in blood pressure, which can lead to fainting.[20]