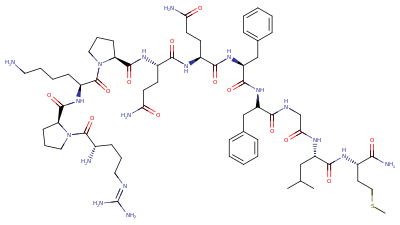 The molecular structure of Substance P.

Substance P (SP) is a neuropeptide that functions as a neurotransmitter and neuromodulator affecting the neurokinin receptors. It has most closely been associated with nociception (pain perception),[1] but seems to have a wide range of effects including an important role in nausea, emesis (vomiting), the rewarding effects of opiates, and likely in regulating stress responses and anxiety/depression-related behavior.[2] SP is found throughout the body, in the brain, peripheral nerve endings and the spine. The full extent of its involvement in neurotransmission and its possible therapeutic or recreational implications is unclear.

SP is an undecapeptide (a peptide consisting of eleven amino acid residues) composed of the amino acid chain Arg-Pro-Lys-Pro-Gln-Gln-Phe-Phe-Gly-Leu-Met, with an amidation at the C-terminus. It is closely related to Neurokinin A (NKA), another neurologically active peptide. Both NKA and SP are encoded by the same mRNA, which when spliced together in different ways can produce either peptide.

SP has high affinity for the Neurokinin 1 receptor (NK1), although it also activates NK2 and NK3. NK1 receptors are often located on neurons that also express norepinephrine or serotonin receptors and is found in brain regions known to be involved in emotional responses, such as the hippocampus and amygdala.[2]

Function as a neurotransmitter or neuromodulator

Substance P does not function like a typical neurotransmitter. There exists no SP transporter to pump the peptide back into the axon terminal, unlike neurotransmitters like dopamine or serotonin which have protein pumps that function to recycle the neurotransmitter once it has left the receptor. Instead, SP must be synthesised from scratch again. However, SP is believed to be released beyond the synapse and may diffuse over larger distances than traditional neurotransmitters, which are limited to the synapse, the tiny gap between one neuron on the sending end and one on the receiving one. Certain regions of the brain have many NK1 receptors but little Substance P or vice versa, which may have different explanations. One possible explanation is that SP may float over larger distances and subsist in the plasma surrounding cells for longer periods of time.

Role in pain perception and interaction with opioids

The most investigated role of SP has been in the perception of pain, although its effects seem to be more complex than simply "more means more pain." SP is abundant in the spinal cord, where it is synthesized in the spinal ganglia and transported centrally to the substantia gelatinosa and peripherally to nerve endings in many areas of the human body. Substance P elicits powerful currents from pain sensors to the spinal cord following noxious stimuli.[1] Nociception is usually mediated by C and Aδ fibers which are activated by painful stimuli. SP performs a central role in this pathway. Aβ fibers normally send innocent tactile sensations from the periphery to the central nervous system, but inflammation can cause hypersensitivity to pain and it has been demonstrated that a subset of Aβ fibers will switch their phenotype to one that expresses SP, and thus become more pain-like, in the presence of inflammation.[3]

A number of NK1 receptor antagonists have been developed and tested for analgesic purposes with limited success.[4] Although preclinical data from animal experiments indicated that NK1 antagonists should produce pain relief in humans, NK1 antagonists proved to be for the most part completely ineffective as analgesics in humans. This is despite the fact that they showed a similar effect profile in animal tests to that of established analgesics like non-steroidal anti-inflammatory drugs (NSAIDs). In addition, the same animal models translated successfully into clinically effective antiemetic drugs. There could be a number of explanations for this; the simplest one being that pain perception is a complex phenomenon in which no one receptor or neurotransmitter is solely responsible. Others include differences in the pharmacology of NKAs in animals and humans, the role of NK2 and NK3 receptors, and the blurring of the lines between stress and pain, as Substance P is also heightened in stressful situations.

A link between the chronic pain condition fibromyalgia and depression has been postulated.[5][6] This may or may not reflect a common biochemical link. In this context, the relevant point is that pregabalin, which reduces the release of a number of neurotransmitters including Substance P, has been found to be effective in the treatment of fibromyalgia.[7]

But Substance P can also modulate pain relief positively. Various stressors can induce analgesia. Short-term pain relief can facilitate the execution of the fight of flight response. Mice forced to swim in cold water develop short-term analgesia, but this response was significantly reduced in knockout mice.[8] Thus, in this instance, the presence of SP enhanced the pain relief induced by the stressor.

In NK1 knockout mice, i.e., mice that had been genetically altered not to express Substance P's preferred receptor, the rewarding effects of morphine were absent.[10] Mice learned to associate one of two compartments with the drug. Wild-type mice developed a strong place preference for the morphine compartment, whereas NK1 knockout mice did not. Opioid-dependent mice were also conditioned to associate one compartment with withdrawal induced by the injection of naloxone. Wild-type mice developed a strong aversion for the withdrawal compartment, whereas NK1 knockout mice showed significantly less avoidance of that compartment. Thus, at least in preclinical animal trials, SP appears to be important both in the positive reinforcement effects of opiates and the negative effects of withdrawal. The physical signs of withdrawal were still present in both wild-type and knockout mice, except for jumping behavior (considered a dominant motor sign of opiate withdrawal in mice) which was not present in knockout mice.

Morphine inhibits the release of SP in the spinal cord.[11]

The motor nucleus of the vagal nerve in the medulla controls functions in the gastrointestinal tract and abdomen and NK1 activation in this area potently invokes relaxation of the fundus, the upper part of the stomach. This relaxation is essential to vomiting, and it has been speculated that the efficacy of SP antagonists in inhibiting vomiting is due to inhibiting this relaxation via the medulla.[14]

Role in the regulation of emotions and stress

There is ample circumstantial evidence that elevated SP is involved in reactions to stress and the regulation of mood.[2] These include the presence of NK1 receptors in emotion centers like the amygdala and the association of SP-neurons with serotonergic or noradrenergic neurons; both serotonin and norepinephrine are heavily implicated in mood order and disorders like anxiety and depression. Elsewhere in the nervous system, SP associates with glutamate, particularly the NMDA receptor. Disruptions of the glutamatergic system have recently been explored for their possible causal role in mood disorders.

Attempts have been made to create anxiolytic and antidepressant drugs out of SP antagonists. Several phase I and II trials of NK1 antagonists, including aprepitant, showed significant antidepressant and anxiolytic activity in depressed patients. However, subsequent phase III trials failed to replicate the findings, and no antidepressant with a mechanism of action related to Substance P has been brought to market.[15]

Male knockout mice were significantly less aggressive when faced with an invasion of their territory compared to wild-type mice, indicating a role in modulating social function.[8]

SP also encourages the growth of epithelial cells in vitro.[17]

Due to its association with largely negative phenomena (pain, stress responses, affective disorders, and vomiting), drug development has been focused on Substance P antagonists. Since SP is a high-affinity ligand for the NK1 receptor, NK1 receptor antagonists were the first to be developed. However, SP also binds to NK2 and NK3 receptors and related neuropeptides have higher affinity for these receptors, so development of antagonists for these receptors has also been pursued. There are a number of NK1 antagonists attested in the medical literature, but few of them are in use. They include: