WORK IN PROGRESS - NOT COMPLETE YET 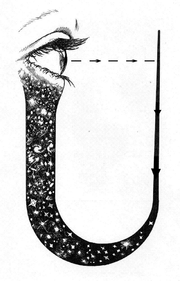 This symbol depicts the universe as a "self-excited" circuit. It was originally created by the late theoretical physicist John Archibald Wheeler in his 1983 paper Law Without Law. The eye represents the self and the line directly opposite represents that which it is perceiving within the "external" environment. The two sections are connected into each other via arrows to demonstrate that it is a singular and unified system.
Main article: Unity and interconnectedness

I experience eye of providence visuals frequently during states of unity and interconnectedness.

Unity and interconnectedness can be described as an alteration in the cognitive rules which define both what one's sense of self or identity is attributed to and what it is felt as separate from. For example, most people feel that the self is inherently separate from their external environment and could not possibly extend into it. I was eighteen years old when I first began experimenting with psychedelics. During my third or so trip on mushrooms, I experienced for the first time a state of unity and interconnectedness. I consider this one of the greatest trips of my life. During the trip, I wrote in my notebook the following:

"I have found god. I have found all of the answers of suffering. The answers are inside myself. I am god. Tripping allows you to see inside the control panel of your mind. Beyond all the daily annoyances (your inner life) there is the answer. There is god. God is inside of you. All you must do is close the door on what has made you “you” and endless possibilities await you. The answers are inside you. I cannot communicate with language what I have felt, I can only communicate with music. I have found god. I am god. God is everywhere. God is in everyone. We are all god, but only few realize it."

My next trip was 20mg of 4-aco-dmt insufflated; during this trip, I had rapid cycling thoughts and felt like I was discovering the secrets of the universe. I saw everyone and everything as myself. After the psychedelic had worn out, the intense feelings of unity and interconnectedness remained for the next four years. It was not a constant feeling, however, I did experience this feeling every single day.

As a result of this 4-aco-dmt trip, I do not require any psychoactive substances to experience unity. Over the past four years I have experienced unity and interconnectedness thousands of times during everyday sober moments. My sense of self will shift 5 to 30 times a day from believing that I have an ego to becoming one with everything in the universe.

When I experience unity, it directly changes what my sense of self is attributed to. My sense of self is capable of including systems which were previously perceived as separate to my identity or being. The experience of this alteration results in intense and inextricable feelings of unity or interconnectedness between myself and specific or multiple "external" systems.

Many people who undergo this experience consistently interpret it as the removal of a deeply embedded illusion, the destruction of which is often described as some sort of profound “awakening” or “enlightenment”. Depending on the degree to which this supposed illusion has been lifted, it can lead onto five possible levels of differing intensity and degrees of interconnectedness which can be read about here.

It feels as though I am not separate from the external and like I'm the entire universe as a whole experiencing itself, exploring itself, and performing actions upon itself through the specific point in space and time which this particular body and conscious perception happens to currently reside within.

The feeling feels similar to these quotations:

I am only using "I" out of convenience; instead I could say "this particular body in which I am currently perceiving."

It is extremely easy for me to trigger states of unity if I take a psychedelic or dissociative. About 95% of my trips result in feeling unity. During one trip on ((huge combo here)), I experienced intense level 5 unity and external hallucinations of the statement "YOU ARE GOD" across my entire vision. I often see visuals of the eye pyramid when experiencing unity.