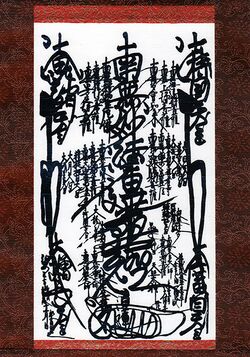 A Gohonzon of a Nichiren school.

This is an account of how I achieved a level 3 state of unity and interconnectedness through meditation and without the use of hallucinogens.

Prior to the experience I had been practising the meditation technique known as mantra chanting twice a day for 5 months. I did this every day for a total of 30 minutes in the morning at sunrise and 30 - 60 minutes after dinner, rarely if ever breaking this schedule.

The mantra itself was a traditional chant from the teachings of Nichiren Daishonin[1], a Buddhist monk who lived in japan and taught devotion to the Lotus Sutra[2] (entitled Myōhō-Renge-Kyō in Japanese)— which contained Buddha's teachings towards the end of his life as the exclusive means to attain enlightenment. The chant itself is pronounced as "nam myoho renge kyo"[3] and can be roughly translated as "I devote myself to the mystic law of the lotus sutra". This chant is traditionally repeated over and over again whilst staring at what is known as an enshrined gohonzon[4]. (see image)

Towards the end of this 5 month period I achieved a state of unity at the end of an intense 2 week period of mantra mediation. I would partake in two hours of mediation or Daimoku, as it's called in the practice of Nichiren Buddhism, for one hour in the morning, as close to sunrise as possible, and a hour in the evening. I continued this routine for two and a half weeks without fail. At the end of the two and a half weeks, I started my mediation that evening as normal and about 40 minutes into the chanting I entered a trance-like state. This was how I described it at the time, but now through use of hallucinogens I can relate it closer to psychedelic ego death as I lost all sense of self and did not know who or what I even was.

In this state I was able to analyse the problems I was trying to help solve through mediation without any personal attachment or interference from the ego, to which I then felt oneness with the entirety of my environment. I began to feel that myself and everything around me were in perfect equilibrium, it reacted to me as I did to it in perfect harmony. This feeling only lasted minutes, which was probably due to my age, knowledge and life experiences as the sudden change in perspective shocked and scared me bringing me out of the feeling of oneness and back into my normal state of consciousness.