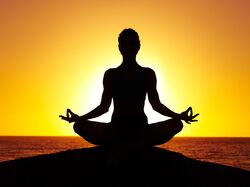 Above is a silhouette posing in the traditional lotus position, a physical position commonly associated with that of meditation.

Meditation is a practice in which an individual trains the mind or induces a mode of consciousness, either to realize some benefit, allow the mind to simply acknowledge its content without becoming identified with that content,[1] or as an end in itself.[2]

The term meditation refers to a broad variety of practices that includes techniques designed to promote relaxation and develop compassion,[3] love, patience, generosity and forgiveness. A particularly ambitious form of meditation aims at effortlessly sustained single-pointed concentration[4] meant to enable its practitioner to enjoy a heightened sense of well-being while engaging in any life activity.

The word meditation carries different meanings in different contexts. Meditation has been practiced since antiquity as a component of numerous religious traditions and beliefs.[5] Meditation often involves an internal effort to self-regulate the mind in some way (this is sometimes referred to as "cultivation"). Meditation is often used to clear the mind and there is a growing body of scientific and medical evidence suggesting that it can assist in easing many health concerns such as high blood pressure,[6] depression and anxiety. It may be done sitting or in an active way; for instance, Buddhist monks involve awareness in their day-to-day activities as a form of mind-training. Prayer beads or other ritual objects are commonly used during meditation in order to keep track of or remind the practitioner about some aspect of the training.

It is worth noting, however, that despite the inconsistencies across cultural practices, universal techniques remain across many methodologies and this article will attempt to define and document these consistencies in a manner that is informative, rational, scientific and generally helpful for those who wish to pursue this deeply profound field of psychonautics.

The biggest problem with defining a meditative technique is that there are many cultural and historical definitions which make different claims regarding the specifics of this subject.

In order to overcome these problems and document meditation as a whole, a simple and usable open source technique and set of information have been devised to define a generalized meditation methodology and its different components. The meditation technique will be presented in a manner that encompasses the culturally specific methods which are consistent across each other. This is with the belief that the subjective effects of the technique will be equal or greater in efficiency than other specific cultural practices.

The most important and universal aspect of a meditative practice is mindfulness. This is a concept which is present in most if not all culturally specific forms of meditation in various forms usually consisting of the practice of some sort of self regulation. It can also be induced as a subjective effect by many psychoactive compounds, but is also primarily and formally something that can be consciously practised and maintained through a set of specific actions or techniques.

It can be broken down into two distinct subcomponents.

The first of these components involves the self-regulation of attention so that its focus is completely directed towards immediate experience, thereby quieting a person's internal narrative and allowing for increased recognition of external and mental events within the present moment. As thoughts come up, the practitioner returns to focusing on their present senses without developing the thought. This is repeated with the intention of quieting the mind.

The second component involves adopting a particular orientation towards one’s experiences in the present moment that is characterized by a lack of judgement, curiosity, openness and acceptance.

The average human being who attempts to quiet their thoughts will notice that their inner monologue will autonomously interject and distract one from the task at hand in a fashion which seems entirely uncontrollable. This is perfectly ordinary; as thoughts come up, a practitioner must passively notice that their mind has wandered, but in an accepting and non-judgemental way before returning the attention of their awareness into simply focusing on the present moment.

There are a number of techniques or tasks which people perform during this act of focus. These are practically universal and commonly include:

During the performance of this task as an act of meditation, attention is placed upon the movement of the abdomen when breathing in and out,[7] or on the awareness of the breath as it goes in and out the nostrils. The breath is noticed as it moves in and out as the body inhales and exhales. One should notice how the breath moves in and out automatically and effortlessly and should not try to manipulate it in any way. The details of the experience of breathing such as the feeling of the air moving in and out of the nose or the way the body moves as it breathes should also be noticed.

As thoughts come up, one returns to focusing on breathing, passively noticing one's mind has wandered, but in an accepting and non-judgemental way.

This is perhaps the easiest form of meditative focus as it is harder to be distracted from than others.

During the performance of this task as an act of meditation, attention is placed upon the repetition of a repeated and outwardly spoken phrase of one's own choosing. This phrase can be anything such as simple counting, but it is worth noting that a phrase with personal significance is often most effective.

As thoughts come up, one returns to focusing on repeating their mantra, passively noticing one's mind has wandered, but in an accepting and non-judgemental way.

During this, mindfulness is intensively placed upon the act of upholding a task of any sort with varying levels of difficulty depending on what one chooses. This could include a range of things from walking, exercising, producing artwork, performing household chores, holding a conversation or any everyday task that one can think of. During this meditative focus, one concentrates on all of the senses available to them during it.

As thoughts come up, one returns to focusing on the task, passively noticing one's mind has wandered, but in an accepting and non-judgemental way.

A famous exercise, introduced by Kabat-Zinn in his MBSR program, is the mindful tasting and eating of a raisin.[8][9] Another popular example of task-based focus meditation is the practice of yoga.

It is important to understand that unlike psychoactive substances, the effects and benefits of meditation are not instantaneous; they are accumulative in a manner which proportionally builds up with persistent repetitive practice over longer periods of time. For example, despite the initial impatience many people experience, a mediation routine of 10 - 60 minutes a day can drastically change one's default, sober day to day perspective in a profound and beneficial way. This is due to the way in which meditation induces persistent beneficial subjective effects throughout daily life.

It has been clinically demonstrated that those who begin 30 minutes of mindfulness meditation practice a day demonstrate detectable changes within their brain structure and report a number of positive effects involving memory, sense of self, empathy, stress, and overall well-being after eight weeks.[10] This demonstrates that even short-term periods of regular meditation have a clinically significant and measurable therapeutic effect on a neurological level.

Therefore, if one wishes to fully experience the changes in perception which meditation has to offer then they must maintain a persistent routine for as much and as long as reasonably possible.

There are a multitude of positions which one can meditate with. These range from lying down or sitting to standing or walking. For personal usage, it is optimum to find a position which suits one best. Retaining a consistent position across sessions can allow one to associate this position with a meditative state and therefore assist in one's practice.

It is also worth noting that retaining a healthy upright posture throughout prolonged meditative techniques is extremely important and that if one is having trouble with this, they should consider moving to a comfortable chair. One should avoid lying down on a comfortable bed or similar surface. This is because doing so can result in sleep and therefore less efficient meditation.

Above are a few potential meditation poses which one may find useful to try.

The effects listed below are based upon the subjective effects index and personal experiences of PsychonautWiki contributors. The listed effects will rarely (if ever) occur all at once and cognitive effects are most common. A persistent and dedicated practice will increase the chances of effects occurring and is more likely to induce a full range of effects.

It is worth noting that whilst many of these effects occur only during states of active meditation, the cognitive effects specifically carry on into everyday life and become more prominent with persistent and regular practice. This is perhaps the most useful aspect of developing a meditation routine and by far the most significant source of its cultural and historical prominence.

Throughout history and culture, there have been many different branches of meditation and its techniques. Although the manners in which they are performed varies, these techniques each follow relatively consistent themes of focusing on external stimuli or the present moment whilst avoiding wandering thought as a means to achieve inner peace.