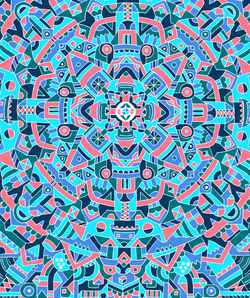 Switch by Sam Perkins - This image serves as an example of a single frame of typical level 4 psychedelic geometry.

Geometry is defined as the experience of a person's field of vision becoming partially or completely encompassed by fast-moving, colorful, and indescribably complex geometric patterns,[1][2][3][4][5][6][7] form constants,[8][9] shapes,[4] fractals,[4] and colors. These geometric forms can also become structured and organized in a manner that appears to present genuine information to the person experiencing them far beyond the perception of meaningless, although complex, shapes, and colors. The geometric representations may feel as though they depict specific concepts and neurological processes that exist within the brain in an extremely detailed manner.

Geometry is rarely motionless and is generally extremely fast-moving,[1] and self-changing in regards to its shape and style. During this process, the geometry naturally drifts laterally or radially across the visual field to create overlapping webs of geometric patterns which transition through many distinct states, all of which are visible within a single perceptual frame.

This experience is often accompanied by other coinciding effects such as internal hallucinations,[4] environmental patterning, and drifting. It is most commonly induced under the influence of moderate dosages of psychedelic compounds such as LSD,[4] psilocybin, and mescaline. However, it can also occur to a lesser extent under the influence of cannabinoids, entactogens, and dissociatives such as cannabis,[3] MDMA, and DXM.

Geometry is capable of manifesting itself across known nine different levels of intensity. These tend to depend on the dosage, but can also fluctuate wildly in their intensity due to external triggers such as a person's set and setting. The individual levels are defined below:

At the lowest level — which may be experienced in a completely sober state — geometry is perceived as visual noise (also known as visual snow, visual static, or eigengrau), combined with stray light and dark red regions that appear under the eyelids.

At this level — which is also obtainable without hallucinogens — the effect can be described as the appearance of unstructured regions of sudden flashes and clouds of color. These are typically referred to as phosphenes and can often be experienced in a sober state by rubbing or applying pressure on or near the closed eyes.

At this level, relatively complex shapes and patterns with a vague structure begin to form. These patterns remain strictly two-dimensional. Geometry at this level is fine, small, and zoomed out in size with a dark color palette that typically limits itself to only a few different shades, such as blacks, reds, and dark purples. They are displayed in front of both the open and closed eye visual fields across a flat veil of geometry. However, they are significantly more detailed with the eyes closed or within dark environments.

At this level, the detail in which the geometry displays itself becomes profoundly complex and fully structured, but still remains strictly two-dimensional. At this point, the geometry becomes larger in size and extremely intricate in detail with a color palette that is nearly limitless in its possibilities. They are displayed on both the open and closed eye visual field across a flat veil of geometry that floats directly before a person's eyes, remaining significantly more detailed with the eyes closed or in dark environments.

At this level, the geometry has become fully three-dimensional in its shape and position across the visual field. This adds a new layer of visual complexity and leaves the geometry sprawled out across the surfaces and objects of a person's environment instead of merely displaying themselves across a basic and flat veil in front of one's visual field.

At this level, the geometry has become so intense, vivid, and bright that it has begun to block out and replace the external world. The visual perception of a person's environment begins to be replaced by geometry, with objects and scenery either transforming into complex geometric structures or simply being blocked out and covered by them. This occurs in a manner that drastically impairs the use of a person's normal vision. From this level of geometry onwards it is even possible to view geometry which is perceived to be four-dimensional or created from new, ineffable, non-euclidean, or nonsensical geometrical principles, although this is more common at higher levels.

At this level, the geometry continues to become more intense, vivid, and bright as it begins to completely block out or replace the external world and a person's sense of normal sight become completely impaired. This creates the perception that one is no longer within the external environment, but has "broken through" into another reality of extremely complex and otherworldly geometric forms.

Level 8A and level 8B

At the highest level, geometry is capable of forking off into two separate levels of equal intensity known as level 8A and 8B. Environmental factors, a person's state of mind, and the substance consumed may determine which level a person experiences.

Once visual geometry reaches level 8A or 8B it begins to become structured and organized in a way that appears to present genuine information to the person experiencing it far beyond the preceding seven levels of relatively meaningless, although complex, shapes and colours. This occurs through the perception of innately understood geometric forms that feel as if they depict specific concepts and neurological processes that exist within the brain. Although this is also possible to a much lesser extent at lower levels it does not occur as consistently, and the intensity of it at levels 8A and 8B is significantly higher. At this point concepts can be seen as not just embedded within a person's closed or open eye visual field, but can also be simultaneously felt through indescribably complex physical and cognitive sensations.

It is worth noting that there are particular attributes of psychedelic substances which tend to result in a higher likelihood of level 8A over 8B and vice versa. Psychedelics which are physically stimulating and contain low amounts of hallucinatory content typically result in level 8A. For example, hallucinogens which tend towards causing level 8A include LSD, 2C-B, and 4-HO-MET. In contrast, psychedelics which lead to level 8B are typically sedating in physical effects and contain high amounts of hallucinatory content. For example, hallucinogens which tend towards causing level 8B include psilocybin, LSA, DMT, and 2C-T-7. 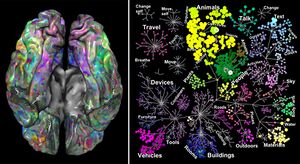 A visualisation of the brain's semantic concept hierarchy based upon data collected through fMRI scans.[10][11]

8A geometry is one of the two potential final levels of visual geometry; the other is 8B geometry.

A level 8A experience can be described as the feeling of being exposed to a seemingly infinite mass of geometry comprised entirely of innately comprehensible representations which are perceived to simultaneously convey every internally stored concept, memory, process, and neurological structure stored within the mind. This experience is not just perceived through visual geometric data, but is also felt in an incomprehensible level of detail that manifests in the form of complex cognitive and physical sensations. These sensations are felt to convey an equal amount of innately understandable information as that of which is also experienced through a person's vision.

At the lower end of level 8A this effect is something that fluctuates wildly and is neither constant nor consistent in its intensity. Instead, it is momentarily triggered by the experience of a concept. For example, if someone were to say the word "Internet" to a person who is currently undergoing this state they would see the mind's concept of the Internet immediately manifested in a geometric form amidst the very center of their visual field. This form will then quickly branch out from itself in a manner which is similar to a spider diagram or mind map chart, such as a network of geometric nodes descending from an origin concept where each node in the network is directly associated with their parent node, but with each degree of separation from the origin reducing the level of association with the source concept. For example, with the origin concept "Internet" one may have dozens of immediate child nodes that are representative of computers, which may have associated descendant nodes involving technologies, which may have their own children which represent human intelligence, which may also have child nodes involving all concepts related to the evolution of humanity, and so on until all concepts known to the person are represented within the network.

Once this occurs the sensory overload can temporarily disconnect one from their external environment and result in simultaneous long-term memory suppression or "ego death" for several seconds to a minute before a person is returned to reality until something triggers the process again, usually immediately. It is worth noting, however, that at this level it can to a certain extent be disabled through continuous physical movement. This seems to be because movement stops the process from branching out into everything by not giving the effect the time it needs to lock onto a concept.

As the dose of the psychoactive substance is increased, the process becomes easier to trigger while extending its length and duration. This eventually results in a stable state of complete disconnection from the external environment alongside of sustained "ego death" and a lasting sense which is often interpreted as experiencing all of existence in a single instant.

8B - Perceived exposure to inner mechanics of consciousness 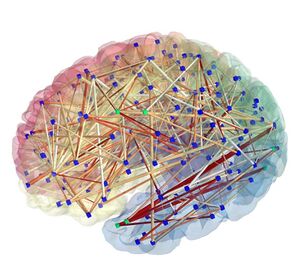 The specific differences between each potential style of geometry can be broken down into the following variations: