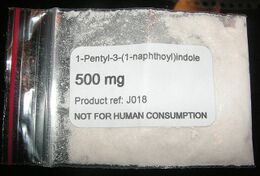 JWH-018 powder as it was commonly sold online

Research chemicals (also called RCs, experimental chemicals, legal highs or designer drugs) refers to psychoactive substances which have unstudied effects and little to no history of medicinal use.[1]

Research chemicals typically have structures and effects similar to illicit substances and are often developed to either improve upon their effects or bypass existing drug laws.[2] Most information about research chemicals is based on first-hand experiences and anecdotal evidence.

The term "research chemical" is used by online vendors to bypass legal restrictions for selling psychoactive compounds. Research chemicals commonly come in packaging labelled "not for human consumption" and are stated to be solely used for the purposes of scientific research.

The term designer drug was coined in 1984[4] following the appearance on the illicit drug market in the USA of a number of fentanyl derivatives. They were defined as ‘analogues, or chemical cousins, of controlled substances that are designed to produce effects similar to the controlled substances they mimic’. These highly potent substitutes for heroin caused a number of accidental deaths. A synthetic contaminant (MPTP) in an α‐prodine derivative[4] led to chemically induced Parkinson's disease in a number of injecting drug users.[5] In the United States, the Controlled Substances Act was amended by the Controlled Substance Analogue Enforcement of 1986, which attempted to ban designer drugs preemptively by making it illegal to manufacture, sell, or possess chemicals that were substantially similar in chemistry and pharmacology to Schedule I or Schedule II drugs.[6]

Amphetamine derivatives, particularly ring‐substituted examples, represented the next phase in the evolution of designer drugs. The ‘phenethylamine period’, likely inspired by the publication of the book PiHKAL in 1991, would last into the early years of the twenty‐first century. In this time, around 50 illicit phenethylamine derivatives were found in police and customs seizures in Europe and the USA. In parallel with the phenethylamines, many tryptamine derivatives appeared throughout the 1990s. Their synthesis may have been inspired by the publication of the book TiHKAL in 1997, though they never became widespread.[5]

New substances rapidly followed the end of the PiHKAL era, the next family being the piperazine derivatives. The prototypical member was BZP. The piperazines occupied a transition state in the marketing of ‘new psychoactive substances’. The source shifted from clandestine laboratories to legitimate chemical supply companies, some of which were located in Asian countries. Since the substances concerned were not initially controlled under drugs legislation, their production and distribution became far more overt. Alongside more traditional retail outlets like head shops, the growth of the internet opened up new channels, where their properties and effects could be openly discussed. It was at this time that the euphemism "research chemical" appeared.[5]

The piperazines were soon followed in around 2008 by cathinone derivatives, the most common of which in Europe was mephedrone. At the same time, the first synthetic cannabinoid agonists were identified in smoking mixtures, which are often known as ‘Spice’.[5]

In the last few years, there has been a rapid proliferation of new substances. Of the approximately 170 substances reported since 1997 by the European Monitoring Centre for Drugs and Drug Addiction (EMCDDA), over half have appeared since 2006.[5]

The safety profile of research chemicals is generally unknown due to a lack of medical studies. There is little to no information on the toxicity, negative health risks, long-term side effects, or lethal dosage of these chemicals, which make their use riskier than the use of more common, well-studied substances. It is for this reason that taking these chemicals for extended periods of time, binging on them, and taking excessive doses is strongly discouraged.

In terms of known risk factors, common issues for research chemicals include the mislabeling, misidentification, and misrepresentation of products, the adulteration of other compounds, and issues of purity.[1] Using a reagent testing kit to properly identify research chemicals is highly recommended before use.

Combining research chemicals presents a risk due to the lack of research and understanding of their pharmacological and toxicological effects. For example, if a research chemical has MAOI effects (like 2C-T-7), this could make it dangerous to combine it with other MAOIs, stimulants and certain substances which release serotonin or dopamine. It is recommended to avoid blends or branded products if the active psychoactive compounds are not listed on the labeling.[7]

Several fatal overdoses have occurred due to Bromo-DragonFLY accidentally being mislabelled by online vendors as both 2C-B-FLY[8] and 2C-E.[3][9] The former is active in the 200-800μg range and is significantly more potent than 2C-E. These situations can be avoided by dosing a minuscule amount of a drug (roughly 0.5 milligrams) and waiting for several hours. This is known as an "allergy test". It is recommended to do this for all new batches of substances. Additionally, it is strongly recommended that one uses a milligram scale to accurately measure their doses.

Anecdotal evidence from users suggests that there do not seem to be any negative health effects attributed to simply trying research chemicals at low to moderate doses by themselves and using them sparingly. However, nothing can be guaranteed. For example, in one extreme case, the research chemical MPPP was found in some cases to contain an impurity called MPTP, which caused brain damage that resulted in a syndrome identical to Parkinson's disease from only a single dose.[1]

Pharmacological deaths are fatalities caused by the direct action of the chemical in the body and do not include deaths as a result of inebriated behavior. The content below is an incomplete list.