Experience:4x 200ug tabs - You do not need to understand - PsychonautWiki

Experience:4x 200ug tabs - You do not need to understand 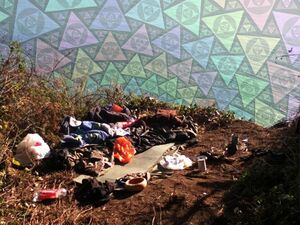 I first noticed I was tripping when I was staring at a caterpillar on the ground beneath my crossed legs. I lost interest in everything else around me (and the 3 friends I was with) very quickly, and just watched this caterpillar, which was rearing up and was swaying in a circular motion. The ground then looked as though it stretched out forever, and was more intricately detailed than I had ever noticed before, and the ground itself started swaying in a circular motion, along with the caterpillar. Then I noticed lots of beautiful patterns, and colours had become more vibrant. I was tripping on acid for the first time! It began!

I don’t remember everything that happened that day, as I went through ego death (for the first time), but I remember that the sea looked as though I needed 3D glasses to see it; it had the same disjointed green and blue colour effect you see on those printed 3D images you view with those cheap glasses. Everything was more vibrant (the greens were greener, etc), but also everything had a purple tint to it, like a thin film of purple had been laid over the world (just like when you see oil in water and catch the sunlight in it). I looked at the treetops from a distance and saw that their colour was pulsating, switching between green and purple and red and back again, like they were having colour poured onto them, one colour after another. It was lovely.

"We got to a cave and I followed my friend Josikins inside."

My friends took me on a tour of the park, and it didn’t feel like I was walking at all; the walk on uneven ground was very easy, almost like I was floating, and it also felt like the ground was rounder than normal and was rotating beneath my feet, so that the world was moving around me and not me walking over it. We got to a cave and I followed my friend Josikins inside, and out again through a small side passage that takes you to the front of the cave again. After I got to the side of the cave entrance I saw my friend lead me inside it, from a 3rd person perspective, just a few metres from me. It didn’t blow me away, I just thought it was pretty cool, and carried on following my friend through the foliage. We were on our way back to the original spot, and Josikins took me into the secret 'Shaman Hut' (which is a modest construction; essentially a lean-to made from canvas against a tree). The Hut looked quite small on the outside, but was enormous on the inside and reminded me of a Bedouin tent. she showed me a book of the universe, with pictures of planets and nebulae and such, but I still thought she was a demi-god and I thought she was showing me the history of the universe through the medium of this book. The pictures became 3D holograms floating above the pages and I kept asking to know more "What happens next?" I asked, and she turned the page and up popped another 3D hologram of a nebula. "How did it begin?" I got around to asking, and she showed me the front of the book, giggling, showing me the page on the very inside of the hard front cover (it was just a pattern, maybe it was of a very zoomed-in image of a nebula), but I saw a swirling purple and pink gas that represented nothingness!

We got back to where we started our trip, overlooking the sea, and I was lost in thought. I was convinced that either I had transcended and was among demi-gods, or that I had died and was on my way to paradise. This wasn’t scary, as the day was too beautiful and I was feeling so fucking happy. The only thing that bothered me that my girlfriend wasn’t there, which I thought meant that I had left her behind when I died, for which I felt guilty, or that I had transcended without her, for which I felt guilty. I kept asking my friends if I had died, or when my girlfriend would get the chance to transcend, but I can’t remember their answers. Probably reassuring ones. All I remembered of the day, of my life even, was taking those tabs and trekking up this huge fucking hill, so I thought that all that had ever existed started when I took those tabs, and that life before then was fake.

"I went through ego death and got stuck in a loop, from which my friends saved me by giving me the phrase ‘You do not need to understand’ to read over and over again on a piece of paper"

I was asking questions aloud to my friends/guardian spirits, like “When did you get here?” (by which I meant, ‘When did you beings come into existence?’), and my friend replied “We’ve been here the whole time, dude” (this proved to me that they were divine). Another friend got up to put something in his backpack, and I thought he was about to jump off the cliff, and I suddenly felt frightfully scared at the prospect, and said “No! Don’t jump!” (thinking instantly of the tales one hears about people who take acid and think they can fly), but he merely said “Why would I jump?”, and that blew away all preconceptions about drugs that I had ever heard from figures of authority! Of course he wasn’t going to jump, why the fuck would he do that? This stuff doesn’t turn you into a moron/zombie/junkie/whatever, we really have been lied to! I then started to think of the authorities in a negative (true?) light that I never really considered before. It was ‘Us’ (the psychedelic community), and ‘Them’ (authority), and I had declared my unwavering support for the former. I thought that I was being recruited by LSD entities (who were just my friends in reality), as some sort of foot soldier in the on-going struggle for liberty! These thoughts passed when I went through ego death and got stuck in a loop, from which my friends saved me by giving me the phrase ‘You do not need to understand’ to read over and over again on a piece of paper (see pics).

The next hour or so I don’t remember, but it was deep. And very beautiful and liberating. One friend stayed behind to keep me company through all this while the other two went exploring, and I asked stuff from time to time (still thinking he was divine); “Where did you come from?” I asked, and he replied by touching my heart and whispering “We came from inside.” Looking back on it he was simply trolling me, but my mind was blown, again. Eventually the others came back and were encouraging me to play my mandolin for them, which I had brought along, naively thinking that the LSD would make me some cosmically-inspired virtuoso on an instrument that isn’t my first choice when making music. They were encouraging me to play, and I felt as though the universe had just given me all of its musical knowledge that had ever existed or would ever be; all of the thousands of years’ worth of musical talent on earth had just been given to me, and now I knew all there could be about music – however I just about managed to (poorly) strum an out-of-tune A chord on my cheap mandolin, and I just burst into laughter. It felt like a Twilight Zone form of irony; despite all of the beauty and perfection one can create in their mind, man is just too imperfect to be able to convey these arts without losing the original thought’s substance. “Words are an encumbrance to meaning”, just as my clumsy ape hands couldn’t convey the music I was hearing at the time. Then I looked at my mandolin and saw Egyptian pyramids where my frets were, and handed the thing to my friend to look at (and also to stop myself from trying to play the mandolin).

Another thing I remember about the trip was the audio effects; everything was ‘swooshy’, like the phasing effect on a flanger, and when I inhaled deeply I heard fluttering – like my inhaled breath was making a purring sound. This has happened on other acid trips since, and I clearly hear this when I listen to music; if I listen to a song and take a deep breath, the drums often sound like they’re speeding up, and when I exhale they slow down to normal tempo, all without making the song sound terrible (it actually sounds really cool). I came down from my trip pretty dramatically; if you can make your eyes quiver or shiver by tensing them (a lot of people can do this, I just don’t know the name for it) then that’s exactly what I see when coming down from acid. In the trips since my first experience it just meant I was coming down, but on my first trip I was sober immediately after. Even though my friends continued to smoke weed to keep the trip going, or to make the visuals more intense, then weed did nothing but get me high. But I was content. We sat on the hill overlooking our home town, and watched the sun go down on one of the best days of my life.