Experience:6g mimosa / 2.5 g syrian rue - Best cake I've had for a while - PsychonautWiki 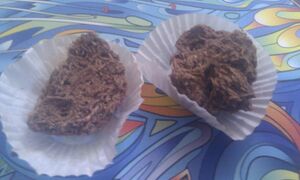 In a chocolate cake.

"They were triangle-based geometric patterns, laced over huge structures"

Initially I was nauseous, but the visuals built up and distracted me. They were triangle-based geometric patterns, laced over huge structures: first the triangular wallpaper was emanating from my centre of focus, then I started flying across the top of the surface, like it was a beautiful racecourse. I felt that as long as I stayed roughly in the centre then I would synch up with Josikins, who also had taken the same amount.

Nausea came and went, and when it went the visuals lit up with glorious intensity – tinted orange like sunlight. I even felt warmer. Ayahuasca started to tell me how to better myself quite early on; first off I was told to get a hair cut (I've recently started a new job and have unkempt, shaggy, longish hair), to look more respectable, and to not be so bloody obvious about what I get up to after work (namely, all these drugs). At this point, I decided not to waste the trip by trying to understand what I saw as I saw it; I would just enjoy the ride and save my questions for afterwards – and this attitude made the trip so incredibly fucking fantastic.

I got up and listened to the music we had on. It was Taxim by Kaleidoscope (the US band); a very ‘eastern’ sounding song. I already liked the music, but the patterns were following the song, playing out a video for me made of abstract visuals and color, and it felt like my mind had unlocked a gate leading to a new realm of music appreciation (in that I would appreciate even more eastern-influenced music).

We went for a walk outside; me, Josikins, and our better halves (who were guiding us). Initially, the chilly air and concrete buildings, the pedestrians talking too loudly for my liking, made me think it was a mistake and I wanted to go back, but my girlfriend assured me that everything was fine so we carried on. I saw more people, who to me looked very aggressive, I saw dog shit on the pavement, and the journey, I knew, was quite a tough walk even sober, so I was very nervous.

"we could see the two big hills of Hastings overlooking the sea, and it was absolutely stunning"

We eventually took a short-cut through a public garden, and I was suddenly in awe at the beauty of the trees, the colors of the flowers, and I was grinning madly then on. The plants smelt amazing. We got to the top of the hill (past the playground, past rowdy teenagers who didn't even annoy me, as I knew they were just trying to have some fun), and we could see the two big hills of Hastings overlooking the sea, and it was absolutely stunning. I was totally relaxed, we put on some music, sat down, and I started going through Egodeath, though I was fully aware of it and functioned normally.

I heard my own voice talking to me excitedly, and these sentences kept repeating themselves in my mind, overlapping each other, swirling around: “Don’t you see? The Hindus were right all along! They found this state-of-mind thousands of years ago!” “We are one” “I am God, they (my friends) are God, we are all God” “This is the reason we do anything” – ‘this’ being Egodeath/Bliss/Nirvana, and ‘anything’ meaning going to work, getting stressed, paying bills, etc. and “You have reached the absolute pinnacle of existence” – this last sentence kept sounding like it had voice-modulation, the end slowing down but remaining in the same pitch = “pinna-cle of exis-tence..”

I came to the conclusion that, although it felt like I could access the history and future of the universe all at once, it didn’t really matter and all that matters is love; it binds us together, gives life its meaning, and is the very reason for existence. All other concerns came after, which is why I wasn’t all that fussed with trying to uncover impossible facts about the nature of the universe while going through Egodeath: it didn’t really matter. After all, what could I change? So I focused on the idea of love, and tripped absolute balls in bliss.

We walked on again and watched the sunset. We then went back to the house, and after the chilly walk the warmth of the room was very welcome. I sat down and went through Egodeath again, all the while the phrases were repeating. Though this time my mind was very clear, there weren’t any visuals (just a clear white light), and I let my breathing slow down and eventually stop; I wasn’t holding my breath, I just didn’t need to breathe any more. While I was like this I felt like I was floating slightly off of my chair, suspended in zero gravity. It was an incredibly liberating sensation. Every so often, I breathed normally and looked around, admiring the good company and nice, safe surroundings. I looked at the people in the room one by one, and my voice in my head said things about them. To one guy who wasn’t tripping, it said “trust in him, he’s in your inner circle as well”, to Josikins it said “you owe this man a lot, treat him well”, and to my girlfriend it said “she will be with you forever, love her forever”. Then I’d close my eyes and float again. I gently cried tears of joy, as the love I felt was just so great.

My girlfriend drove us home, and I was giddy with excitement; any moment now, I was going to transcend! There were no cars on the road, because there were only a few people in existence right now! Though actually I was just coming down and had thought loops, so I thought I was going to go through Egodeath again. I ended the trip being utterly dopey; I went to the bathroom, forgot why I was there, and just stood around for ages. I thought I had done something terrible and felt really guilty. I didn’t sleep as I felt so guilty and needed to piss so badly because I forgot to go while in the bathroom, but I didn’t do anything about it as I thought it was an adequate punishment for some horrible thing I had done. There wasn’t anything I did, of course, I just needed guidance on everything at that point, and I needed help getting undressed and put into bed...

But hey, what a trip!