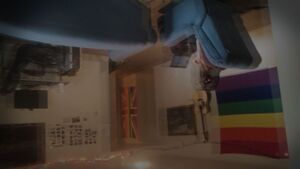 Visual flipping by Josikins - This image serves as an accurate portrayal of visual flipping, as experienced within a living room. There is also a significant amount of double vision present within this image

Visual flipping is defined as a distortion in the surrounding environment that makes it appear as if it has been rotated, mirrored, or flipped into an alternative orientation. For example, during this experience, one's vision may suddenly be viewed as upside down or sideways. This effect is usually very fleeting in its occurrence, typically ranging from a few seconds to less than a minute.

Visual flipping is an uncommon and rare effect which is often accompanied by other coinciding effects such as visual stretching, double vision, and visual disconnection. It is most commonly induced under the influence of heavy dosages of dissociative compounds, such as ketamine, PCP, and DXM. However, this holds particularly true for the onset of nitrous oxide and salvia divinorum, especially in the moments immediately preceding ego death.