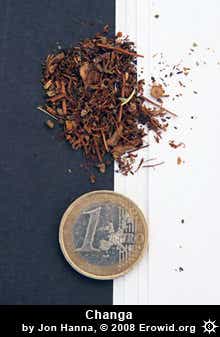 Changa (or xanga) is a blanket term for a smokable blend that contains the psychedelic substance dimethyltryptamine (NN-DMT) infused onto a MAOI containing herb such as syrian rue or banisteriopsis caapi.

Changa is usually made by pouring a DMT solution (such as DMT that has been mixed with isopropyl alcohol) over a chosen blend of herbs and letting the solvent evaporate. The final product can then be smoked in a manner like tobacco or cannabis. Although there are many varieties of Changa, like ayahuasca, the key active ingredients are DMT and an MAOI. The inclusion of the MAOI is reported to extend the experience by 10 to 30 minutes while making it more subjectively coherent and less chaotic than freebase DMT.

An alternate way experience Changa is to orally dose a MAOI agent (either pharmaceutical or herbal) and then proceed to vaporize DMT as one normally would after the MAOI has taken effect. This has the advantage of allowing the user to "break through" on significantly lower dose.

The percentages of DMT and MAOI concentration in the mixture can vary. A typical mixture would be characterized by breakthrough experiences at a dosage of approximately "one full bong bowl" (with each breath held in for at least 20 full seconds). There have also been reports of breakthroughs occurring with Changa that has been rolled into joints, though this is a far less reliable method of doing do.

The main advantage of smoking Changa directly over smoking pure free-base DMT is that it's easier to smoke and reduces the chance of burning the DMT instead of vaping it is the, Here A guide to properly preparing Changa can be accessed here.

Changa was created by Australian Julian Palmer in 2003-2004[1] nd named when he 'asked' for a moniker for the drug during an Ayahuasca session.[2]

Changa was growing in popularity as of 2015 due to its ease of smoking and longer duration (approximately 10-20 minutes) compared to smoking freebase DMT crystal.[3]

"Enhanced leaf" is a related term that is sometimes used to describe DMT-containing herb-mixtures that do not contain MAOIs. Common herbs that can be used for this purpose can range from passionflower to mint leaves.