N,N-Dimethyltryptamine (also known as DMT, N,N-DMT, Dmitri, and "The Spirit Molecule") is a classical psychedelic substance of the tryptamine class.[1] Despite being one of the simplest psychedelic compounds, it is known for its unique ability to produce short-lived but intense visionary states and complete hallucinations. It is thought to produce its psychedelic effects by binding to serotonin receptors in the brain, although the precise mechanism is not fully understood.

DMT is present in over 65 species of plants and has been identified as being a normal constituent of human metabolism and an endogenous neurotransmitter in certain rodents. Its presence is also known to be widespread throughout the plant kingdom.[2][3] Although various theories have been postulated, its neurobiological function has yet to be determined.[citation needed]

Depending on the dosage and method of administration, the effects of DMT can range from mild psychedelic states to powerfully immersive life-altering experiences which are often described as the ultimate displacement from ordinary consciousness in which users report experiencing ineffable spiritual realms or alternate dimensions.[4]

When vaporized or smoked, DMT produces short-lived effects with a very rapid onset that is sometimes described as an "inconceivably high-speed rollercoaster ride." When ingested in combination with a MAOI or RIMA agent, it becomes active orally and significantly longer lasting, immersive, and interactive in nature: this combination is known as ayahuasca.[5] Ayahuasca brews have been used traditionally in South America since at least around the year 1500.[6]

Unlike most highly prohibited substances, DMT is not considered to be addictive or toxic by the scientific community.[7][1] Nevertheless, unpredictable adverse reactions such as uncontrollable anxiety, delusions and psychosis can always occur, particularly among those predisposed to mental disorders.[8] While these negative reactions or "bad trips" can often be attributed to user inexperience or improper preparation of set and setting, they have been known to happen spontaneously among even highly experienced users as well.

It is highly advised to use harm reduction practices if using this substance. 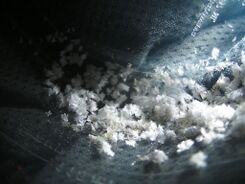 DMT was first synthesized in 1931 by the German chemist Richard Helmuth Fredrick Manske.[10][11] Its discovery as a natural product is generally credited to Brazilian chemist and microbiologist Oswaldo Gonçalves de Lima who, in 1946, isolated an alkaloid he named nigerina (nigerine) from the root bark of jurema preta (Mimosa tenuiflora).[11][12][13]

Since 1955, DMT has been found in a host of organisms: in at least fifty plant species belonging to ten families,[2] and in at least four animal species, including one gorgonian[16] and three mammalian species.

DMT, or N,N-dimethyltryptamine, is a member of a family of organic compounds known as tryptamines. Tryptamines share a core structure consisting of a bicyclic indole heterocycle attached at R3 to an amino group via an ethyl side chain. DMT contains two methyl groups (CH3-) bound to the terminal amine RN at the end of this chain.

DMT has many homologs and analogs from base tryptamines like MET and DPT, to four and five position substituted variants such as 4-PO-DMT (psilocybin), 4-AcO-DMT (psilacetin), 5-HO-DMT (bufotenin), and 5-MeO-DMT.

DMT is a white, pungent-smelling, crystalline solid. It is insoluble in water, but soluble in organic solvents and aqueous acids.[17]

DMT's psychedelic effects are believed to come from its efficacy at the 5-HT2A receptor as a partial agonist. However, the role of these interactions and how they result in the psychedelic experience continues to remain elusive.

In addition to this, N,N-dimethyltryptamine is believed to be an endogenous ligand for the sigma receptor. However, the significance of the sigma-1 receptor remains the subject of ongoing scientific research.[18]

DMT in its smokeable form is reported to be the least mentally inebriating psychedelic. It is due to a lack of perceived intoxication that many people describe DMT as a genuine experience that is actually happening to them. It is worth noting that many people report that smoked DMT is extremely clear-headed in its style and tends to produce less personal insight in comparison to orally active psychedelics such as ayahuasca, LSD and psilocybin due to its short-acting nature.

When smoked or vaporized at moderate to heavy dosages, the DMT experience consistently manifests itself in a progressive sequence which can be described as follows:

The first step of a DMT trip is the come up that leads onto an experience commonly referred to as "breaking through." This seems to have at least a few different ways of presenting itself to the user.

The first thing that a person notices is an extremely distinct set of visual enhancements such an increase in visual acuity and colour intensity. This is followed by a sudden onset of high level 3 geometry which increases in its intensity until it envelopes and covers the external environment. These effects are often accompanied by auditory hallucinations such as soft crackling sounds or high pitched extended tones. There is also the possibility of accompanying physical sensations as one "breaks through." These can include feelings of suddenly being pushed through and onto the other side of a membrane or feelings of shooting through space at high speeds.

Almost immediately after a person has inhaled enough DMT to have "broken through", they often find themselves spending a brief amount of time in what is sometimes described as a psychedelic "waiting room" or "loading screen." The appearance of this space can assume a seemingly infinite variety of forms but generally appears in the shape of an enveloping tunnel comprised of rapidly shifting, interlocking geometry. This lasts approximately 10 – 20 seconds and feels qualitatively different from other stages of the experience.

Once the waiting period is over, the user will feel that they have "broken through" onto the other side. It is here where users experience intense level 7 geometry and level 3 - 4 internal hallucinations. It is worth noting that although experiences vary between individuals, DMT trips often follow common archetypes, scenarios, content, and plots. These scenarios generally consist of visiting what appears to be an alternate reality that is often described to contain autonomous entities, settings, sceneries, and landscapes as well as themes of a cosmic, transcendental, or transpersonal nature.

The final stage is experienced as the sensation of being pulled further and further away from the scenario until it is no longer visible and one finds themselves back in reality. This is typically accompanied by level 3 - 4 geometry as well as a sense of general exhilaration and awe. The moderate to mild geometry stays for a further 10 – 15 minutes before disappearing completely, sometimes leaving a noticeable "body high" that lingers for up to an hour.

Mimosa hostilis (also known as Mimosa tenuiflora, Jurema and Tepezcohuite) is a perennial tree or shrub native to the northeastern region of Brazil and is found as far north as southern Mexico. Around 1% of the dried weight is DMT. It is legal to purchase online in many parts of the world and a commonly used source for performing DMT extractions or brewing into ayahuasca.

Acacia confusa (also known as Acacia Petit Feuille, Small Philippine Acacia, Formosa Acacia (Taiwan Acacia) and Formosan Koa) is a perennial tree native to South-East Asia. It is legal to purchase online and easily accessible in many parts of the world. The plant matter itself contains the following chemicals:[citation needed]

Preparation methods for this substance found within our tutorial index include:

Dr. Rick Strassman has hypothesized that the pineal gland is responsible for the production and release of DMT which he believes possibly could be excreted in large quantities at the moments of birth and death.[19] However, this view was contested by David E. Nichols in 2018, who argued that the pineal gland secretes insufficient amounts of DMT to produce psychoactive effects.[20]

In 2019, a study by Jimo Borjigin demonstrated in rat brains that brain neurons with the two enzymes required to make DMT were not just in the pineal gland but also in the neocortex and hippocampus.[21]

In 2018, a study demonstrated neuroplasticity induced by DMT and other psychedelics through TrkB, mTOR, and 5-HT2A signaling.[22]

Exposing compounds to the reagents gives a colour change which is indicative of the compound under test.

DMT is considered to be non-addictive, is not associated with any form of neurotoxicity, and has an extremely low toxicity relative to dose. As with other psychedelic substances, there are relatively few physical side effects associated with acute DMT exposure. Various studies have shown that in reasonable doses in a careful context, it has little to no negative cognitive, psychiatric or physical consequences.[12]

However, as with psychedelics generally, DMT is thought to be able to act as a potential trigger for those with underlying psychiatric conditions. Those with a personal or family history of mental illness are advised not to use this substance unless under medical supervision.

Despite the lack of physical risks, it is highly advised to approach this substance with extreme caution and harm reduction practices.

The median lethal dose (LD50) of DMT in humans has never been reached in any setting, nor is this expected to change due to its pharmacological properties.

Like other serotonergic psychedelics, DMT is considered to be non-addictive with a low abuse potential.[12] There are no literature reports of successful attempts to train animals to self-administer DMT — an animal model predictive of abuse liability — indicating that it does not have the necessary pharmacology to either initiate or maintain dependence. Likewise, there is virtually no withdrawal syndrome when chronic use of DMT is stopped.[citation needed]

Notably, tolerance to the effects of DMT does not appear to occur. The reason for this is unknown. Likewise, DMT does not produce cross-tolerance with other psychedelics, meaning that after the consumption of DMT psychedelics will not have a reduced effect.

Disclaimer: Psychoactive substances that are reasonably safe to use on their own can suddenly become dangerous or even life-threatening when combined with other substances. The following list includes some known dangerous interactions (although it is not guaranteed to include all of them).

Independent research (e.g. Google, DuckDuckGo) should always be conducted to ensure that a combination of two or more substances is safe to consume. Some of the listed interactions have been sourced from TripSit.

Internationally, DMT is classified as a Schedule I controlled substance under the United Nations 1971 Convention on Psychotropic Substances, meaning that international trade in DMT is supposed to be closely monitored and its use is supposed to be restricted to scientific research and medical use. Natural materials containing DMT, including ayahuasca, are not regulated under the 1971 Psychotropic Convention.[24][25]