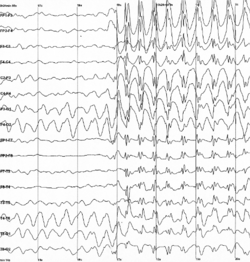 An epileptic seizure (colloquially a fit) can be described as a brief episode of signs and/or symptoms which are due to abnormal, excessive, or synchronous neuronal activity in the brain.[1] The outward effect can vary from uncontrolled jerking movement (tonic-clonic seizure) to as subtle as a momentary loss of awareness (absence seizure).

The following list contains a more comprehensive set of symptoms:

The disease of the brain characterized by an enduring predisposition to generate epileptic seizures is known as epilepsy,[1][2] but seizures can also occur in people who do not have epilepsy. Depending on the cause, epilepsy is generally treated with anticonvulsant drugs such as diazepam and pregabalin.