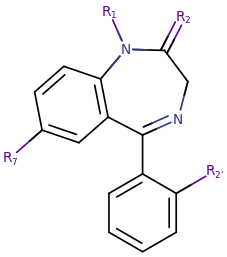 The core structure of benzodiazepines 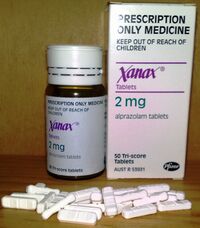 Benzodiazepines (commonly referred to as benzos) are a class of psychoactive substances that act as central nervous system depressants. These substances work by magnifying the efficiency and effects of the principal inhibitory neurotransmitter gamma-aminobutyric acid (GABA) by binding to and acting on its receptors.[2]

Sudden discontinuation of benzodiazepines can cause seizures (which may be life-threatening in certain cases[4]) for individuals who have been heavily using them for a prolonged period of time. For this reason, it is recommended to gradually lower the daily dose over a period of time instead of stopping abruptly — a technique known as tapering.[5]

The molecular structure of chlordiazepoxide, the first benzodiazepine. It was marketed by Hoffmann–La Roche from 1960 branded as Librium.

The first benzodiazepine, chlordiazepoxide (Librium), was synthesized in 1955 by Leo Sternbach while working at Hoffmann–La Roche on the development of tranquilizers. The pharmacological properties of the compounds prepared initially were disappointing, and Sternbach abandoned the project.

Two years later, on April 1957, co-worker Earl Reeder noticed a "nicely crystalline" compound leftover from the discontinued project while spring-cleaning in the lab. This compound, later named chlordiazepoxide, had not been tested in 1955 because of Sternbach's focus on other issues. Expecting pharmacology results to be negative, and hoping to publish the chemistry-related findings, researchers submitted it for a standard battery of animal tests.

However, the compound showed very strong sedative, anticonvulsant, and muscle relaxant effects. These impressive clinical findings led to its speedy introduction throughout the world in 1960 under the brand name Librium.[6][7] Following chlordiazepoxide, diazepam marketed by Hoffmann–La Roche under the brand name Valium in 1963, and for a while the two were the most commercially successful drugs. The introduction of benzodiazepines led to a decrease in the prescription of barbiturates, and by the 1970s they had largely replaced the older drugs for sedative and hypnotic uses.[8]

The new group of drugs was initially greeted with optimism by the medical profession, but gradually concerns arose; in particular, the risk of dependence became evident in the 1980s. Benzodiazepines have a unique history in that they were responsible for the largest-ever class-action lawsuit against drug manufacturers in the United Kingdom, involving 14,000 patients and 1,800 law firms that alleged the manufacturers knew of the dependence potential but intentionally withheld this information from doctors.

At the same time, 117 general practitioners and 50 health authorities were sued by patients to recover damages for the harmful effects of dependence and withdrawal. This led some doctors to require a signed consent form from their patients and to recommend that all patients be adequately warned of the risks of dependence and withdrawal before starting treatment with benzodiazepines.[9] The court case against the drug manufacturers never reached a verdict; legal aid had been withdrawn and there were allegations that the consultant psychiatrists, the expert witnesses, had a conflict of interest. This litigation led to changes in British law, making class action lawsuits more difficult.[10]

Although antidepressants with anxiolytic properties have been introduced, and there is increasing awareness of the adverse effects of benzodiazepines, prescriptions for short-term anxiety relief have not significantly dropped.[11] For treatment of insomnia, benzodiazepines are now less popular than nonbenzodiazepines, which include zolpidem, zaleplon and eszopiclone.[12] Nonbenzodiazepines are molecularly distinct, but nonetheless, they work on the same benzodiazepine receptors and produce similar sedative effects.[13]

Benzodiazepine is a heterocyclic compound comprised of a benzene ring fused to a seven-member nitrogenous diazepine ring. Benzodiazepine drugs contain an additional substituted phenyl ring bonded at R5, resulting in 5-phenyl-1,4-benzodiazepines with different side groups attached to the structure to create a number of drugs with different strength, duration, and efficacy.

Benzodiazepines produce a variety of effects by binding to the benzodiazepine receptor site and magnifying the efficiency and effects of the neurotransmitter gamma aminobutyric acid (GABA) by acting on its receptors.[2] As this site is the most prolific inhibitory receptor set within the brain, its modulation results in the sedating (or calming effects) of benzodiazepines on the nervous system.

The anticonvulsant properties of benzodiazepines may be, in part or entirely, due to binding to voltage-dependent sodium channels rather than benzodiazepine receptors.[14]

Benzodiazepines function as weak adenosine reuptake inhibitors. It has been suggested that some of their anticonvulsant, anxiolytic, and muscle relaxant effects may be in part mediated by this action.[15]

It is also worth noting that these effects will not necessarily occur in a predictable or reliable manner, although higher doses are more liable to induce the full spectrum of effects. Likewise, adverse effects become increasingly likely with higher doses and may include addiction, severe injury, or death ☠. These effects are listed and defined in detail within their own dedicated articles below:

The dosages below represent approximate equivalent dosages between various benzodiazepines in comparison to 10mg of diazepam.

The authors of this table specifically state that their equivalents differ from those used by other authors and "are firmly based on clinical experience during switch-over to diazepam at the start of withdrawal programs but may vary between individuals."[23]

When combined with benzodiazepines, the visual hallucinations induced by hallucinogenic substances (particularly psychedelics) may significantly decrease along with any underlying anxiety that may be present.[citation needed]

Along with antipsychotics such as quetiapine (Seroquel), benzodiazepines are commonly administered in hospital settings to treat patients presenting symptoms of hallucinogen overdose or psychosis.[24]

Benzodiazepines have a low toxicity relative to dose, and are considered to be effectively non-lethal on their own.[26] However, their potential potentially lethality increases significantly when mixed with depressants like alcohol or opioids.

Benzodiazepines are known to be extremely physically and psychologically addictive.[citation needed]

Tolerance will develop to the sedative-hypnotic effects within a couple of days of continuous use.[27] After cessation, the tolerance returns to baseline in 7-14 days. Withdrawal symptoms or rebound symptoms may occur after ceasing one's usage abruptly following a few weeks or longer of steady dosing and may necessitate a gradual dose reduction.[28][29]

Benzodiazepine overdoses may be treated effectively in a hospital environment, with generally favorable outcomes. Care is primarily supportive in nature, although overdoses are sometimes treated with flumazenil, a GABAA antagonist[30] or additional procedures such as adrenaline injections if other substances are involved.[citation needed]

Benzodiazepine discontinuation is notoriously difficult; it is potentially life-threatening for individuals using regularly to discontinue use without tapering their dose over a period of weeks. There is an increased risk of high blood pressure, seizures, and death.[31] Substances which lower the seizure threshold such as tramadol should be avoided during withdrawal.[citation needed] Abrupt discontinuation also causes rebound stimulation which presents as anxiety, insomnia and restlessness.[citation needed]