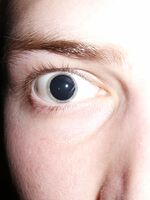 An image example of a dilated pupil

Pupil dilation (also called mydriasis) can be described as the enlargement of the size of a person's pupils under normal lighting conditions. Normally, the pupil size increases in the dark and shrinks in the light, however, a dilated pupil will remain excessively large even in a bright environment.

Pupil dilation is most commonly induced under the influence of moderate dosages of a wide variety of serotonergic compounds, such as psychedelics, dissociatives, deliriants, entactogens, various stimulants[1] and some antidepressants.