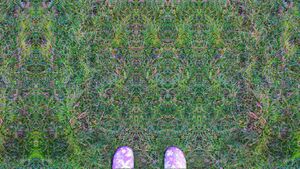 Symmetrical texture repetition is defined as the perception of textures becoming mirrored repeatedly over their own surface in an intricate and symmetrical fashion that is consistent across itself. This maintains the same level of detail no matter how closely one attempts to look at the distortion and tends to remain most prominent within one's peripheral vision. It usually manifests itself in rough textures such as grass, carpets, tree bark, and asphalt.

During this state, if one stares at a fixed point the symmetrical texture repetition may progressively increase and further tesselate into more complex forms. However, this progression of complexity will usually reset back to baseline as soon as one double takes.

Symmetrical texture repetition is often accompanied by other coinciding effects such as pattern recognition enhancement[1][2] and transformations in a manner which can result in the appearance of a huge array of abstract forms and imagery embedded within the symmetry. It is most commonly induced under the influence of mild dosages of psychedelic compounds, such as LSD, psilocybin, and mescaline. However, it can also occur less commonly under the influence of certain stimulants and dissociatives, such as MDMA or 3-MeO-PCP.

This animation serves as a demonstration of how symmetrical texture repetition can be accurately reproduced by simply symmetrically mirroring rough textures across themselves.

It is worth noting that to accurately replicate the appearance of this effect through the use of image editing software, all one needs to do is simply mirror a texture across itself in a symmetrical manner. This may suggest that a similar process is occurring within the brain, perhaps by filling in missing details by taking visual data from within one's central line of sight and mirroring it across the peripheral in a manner which results in a symmetrical tessellation of the texture.