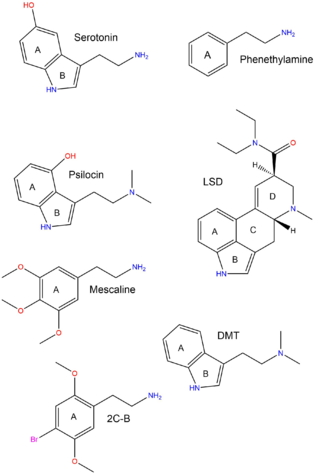 Serotonergic psychedelics (also known as serotonergic hallucinogens) are a class of hallucinogenic substances with a method of action strongly tied to modifying the normal neurotransmission of serotonin in the central nervous system (CNS).

Serotonin, which is also referred to as 5-HT (from its chemical name 5-hydroxy-tryptamine), is a naturally-occurring monoamine neurotransmitter that is tied to functions including developmental, cardiovascular, gastrointestinal, and endocrine function, sensory perception, behaviors such as aggression, appetite, sex, sleep, mood, cognition, and memory, many of which have yet to be fully understood.[1]

The diagram above demonstrates the neural connections associated with sobriety in comparison to being under the influence of psilocybin as demonstrated through the use of MRI scans.

Figure 1 - The figure shows a model in which hallucinogens, such as psilocin, LSD and DMT, increase extracellular glutamate levels in the prefrontal cortex through stimulation of postsynaptic serotonin 2A (5-HT 2A) receptors that are located on large glutamatergic pyramidal cells in deep cortical layers (V and VI) projecting to layer V pyramidal neurons.

This image shows how, with eyes-closed, much more of the brain contributes to the visual experience under LSD (right image) than under placebo (left image). The magnitude of this effect correlates with participants’ reports of complex, dreamlike visions.[4]

While the full mechanism of action is not understood, serotonergic psychedelics are known to exhibit partial agonist activity for various 5-HT receptors in ​a range of affinities and efficacies. As a result, they may be classified by their activity at different 5-HT sub-sites, such as 5-HT1A, 5-HT1B, 5-HT2A, etc.

Many serotonergic psychedelics, such as the family of tryptamines, have very strong structural similarities to serotonin itself. This partially explains the affinity they have for certain 5-HT sites. Most research suggests that the signature psychedelic effect is due to strong partial agonist activity at the 5-HT2A, and to a lesser extent, 5-HT2C and 5-HT1A receptors.[citation needed]

The cortico-striato-thalamo-cortical loops (also known as CSTC-loops) appear to be central to the function of psychedelics,[5] which are also regulated by the serotonergic system. These control loops connect brain areas like the frontal lobe, the striatum and the thalamus; they aggregate, process and forward internal and external information.

The disruption of the neurotransmitter balance causes these control loops to collapse overwhelmed, leading to the flooding of the frontal lobe with neuronal excitatory glutamate; internal and external stimuli as well as all kinds of non-conscious contents can freely move up to the cerebral cortex and appear as visions in consciousness.[6][7]

Furthermore, over-activation of the locus coeruleus and subsequent widespread norepinephrine secretion may occur, causing a perceived state of sensory transcendence and sometimes even intense spiritual or transpersonal experiences.

It is worth noting that selective serotonin reuptake inhibitors (a class of antidepressants including Paxil, Prozac, and Zoloft) can increase the dosage required for hallucinogenic effects in some people (based on anecdotal reports). Some users, however, have found this to be entirely untrue for them, so those who are using daily antidepressants should, at first, only attempt a common dosage.