N-Methylamphetamine (also known as Methamphetamine, Ma, Meth, Glass, Ice, Shard, Crank, Tina, T, Tweak, Yaba, and Crystal[3]) is a classical stimulant substance of the amphetamine class. It is structurally related to amphetamine, however it crosses the blood-brain barrier more rapidly, due to its relatively high lipid solubility.[4] It produces its effects by increasing levels of the neurotransmitters serotonin, dopamine, and norepinephrine in the brain.

Methamphetamine was first synthesized from ephedrine in 1893 by Japanese chemist Nagayoshi Nagai.[5] Along with heroin and cocaine, it has a notorious reputation as a dangerous and highly addictive "street drug".[6]

Subjective effects include motivation enhancement, stamina enhancement, appetite suppression, increased libido, and euphoria. Chronic high-dose use can induce states of anxiety & paranoia, delusions, thought disorganization, psychosis, and violent behavior. It is associated with compulsive redosing, especially when it is vaporized ("smoked") or injected, due to the overwhelming euphoric rush it produces in the user upon initial administration.

Methamphetamine has been shown to have extremely high abuse and addiction potential; it is widely considered to be one of the most addictive substances due to the intense euphoria it produces.[citation needed] Additionally, unlike amphetamine at therapeutic doses, methamphetamine at moderate to heavy recreational doses is considered to be directly neurotoxic to humans, damaging both dopamine and serotonin neurons within the central nervous system. In nonhuman mammals, degeneration of monaminergic terminals and neuronal apoptosis (cell death) has been known to occur.[7] In humans the effects are also neurotoxic.[8] It also displays cardiotoxicity, including increased blood pressure and elevated risk of stroke and heart attack.

It is highly advised to use harm reduction practices if using this substance. 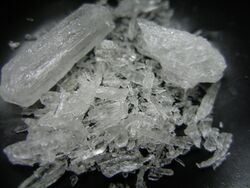 Amphetamine was first synthesized in 1887 in Germany by Romanian chemist Lazăr Edeleanu who named it phenylisopropylamine.[9] Shortly after, methamphetamine was synthesized from ephedrine in 1893 by Japanese chemist Nagai Nagayoshi.[10] Neither drug had a pharmacological use until 1934, when Smith, Kline, and French began selling amphetamine as an inhaler under the trade name Benzedrine as a decongestant.[11] During World War II, amphetamine and methamphetamine were used extensively by both the Allied and Axis forces for their stimulant and performance-enhancing effects.[12][13]

Eventually, as the addictive properties of the drugs became known, governments began to place strict controls on the sale of the drugs.[14] For example, in 1970 in the United States, the two drugs methamphetamine and amphetamine became schedule II controlled substances under the Controlled Substances Act.[15]

Despite strict government controls, both amphetamine and methamphetamine have still been used legally or illicitly by individuals from a variety of backgrounds for different purposes.[16][17][18][19] Due to the large underground market for these drugs, they are frequently illegally synthesized by clandestine chemists, trafficked, and sold on the black market.[20] Based upon drug and drug precursor seizures, illicit amphetamine production and trafficking is much less prevalent than that of methamphetamine.[citation needed]

Methamphetamine hydrochloride is approved by the United States Food and Drug Administration (USFDA) under the trade name "Desoxyn".[21] However, it is rarely prescribed due to its abuse potential, typically being reserved for cases of severe obesity or ADHD in which all other treatment options have been exhausted.

Methamphetamine exists as two enantiomers: dextrorotary and levorotary. Dextrorotatory or dextromethamphetamine (also known as d-methamphetamine) is a stronger central nervous system (CNS) stimulant than levomethamphetamine; however, both are considered to be dependence-forming and addictive when misused and capable of producing similar toxicity symptoms at heavy recreational doses.[citation needed]

In addition to releasing potent amounts of monoamines, MA has a high lipid solubility which leads to a relatively fast transfer of the drug across the blood-brain barrier and a quick onset in comparison to other stimulants.[4] All of this results in feelings of reward, euphoria, and stimulation as well as an unpleasant offset.

There is evidence that methamphetamine causes brain damage from long-term use in humans; this damage includes adverse changes in brain structure and function, such as reductions in gray matter volume in several brain regions and adverse changes in markers of metabolic integrity.[26]

As with other stimulants, the chronic use of methamphetamine can be considered extremely addictive with a high potential for abuse and is capable of causing psychological dependence among certain users. When addiction has developed, cravings and withdrawal effects may occur if a person suddenly stops their usage.

Tolerance to the effects of methamphetamine rapidly develops with prolonged and repeated use.[34][35] This results in users having to administer increasingly large doses to achieve the same effects. After that, it takes about 3 - 7 days for the tolerance to be reduced to half and 1 - 2 weeks to be back at baseline (in the absence of further consumption). Methamphetamine presents cross-tolerance with all dopaminergic stimulants, meaning that after the consumption of methamphetamine all stimulants will have a reduced effect.

This increased central vs peripheral effect of methamphetamine agrees with the common subjective feeling among stimulant users that the methamphetamine high has less of an inherently 'jittery' quality to it. The downside is that this aversive effect may be helpful as it discourages harmful levels of use. It is unclear what real world impact this difference has. A double-blind but small study of 13 methamphetamine users revealed only a minor preference towards methamphetamine, and this may be explained by the users having a greater familiarity with the drug.[40]

Abuse of methamphetamine can result in a stimulant psychosis that may present with a variety of symptoms (e.g., paranoia, hallucinations, delusions).[37] A review on treatment for amphetamine, dextroamphetamine, and methamphetamine abuse-induced psychosis states that about 5–15% of users fail to recover completely.[37][41] The same review asserts that, based upon at least one trial, antipsychotic medications effectively resolve the symptoms of acute amphetamine psychosis.[37] Psychosis very rarely arises from therapeutic use.[42]

Studies have shown that N-acetylcysteine (NAC) can block the harmful neurotoxic effects of methamphetamine while preventing neurotransmitter depletion in rats[46] and clinical trials in humans to treat methamphetamine dependence are currently underway. NAC may be effective for reducing the cravings and psychological dependence as well.[47] NAC has a short half life and a sustained release formulation may be preferred for harm reduction purposes. Selenium has also been shown to protect the brain against meth induced neurotoxicity.[48] However, it is worth noting that this data is preliminary and may not be applicable to humans.

The production, distribution, sale, and possession of methamphetamine is restricted or illegal in many jurisdictions.[52][53] Methamphetamine has been placed in Schedule II of the United Nations Convention on Psychotropic Substances treaty.[54]