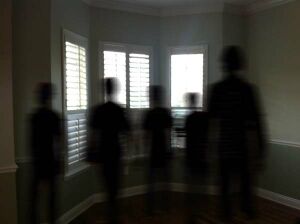 Untitled by Anonymous - An accurate representation of the experience of shadow people.

Shadow people are defined as the experience of perceiving patches of shadow in one's peripheral or direct line of sight that appear and behave as living, autonomous beings.[1][2][3] Due to the unique behavior of these hallucinations they can be considered as a distinct sub-type of autonomous entity.

Shadow people usually, but not always, begin to appear initially as fleeting images in a person's peripheral vision. However, at higher levels of intensity shadow people may begin to appear in full view in a manner which allows them to be directly looked at. At advanced mental states, it is even possible to look away from and look back at the shadow person without a change in the presence or appearance of the hallucination.

The bodies of these shadow people are usually perceived as being comprised of a type of blackness that has a sense of depth with few facial or bodily features. The blackness of their bodies often seem almost opaque, as if one is looking into a "black hole" in humanoid form. They may also appear in the shape of animals, uniform blobs, disembodied body parts, or a myriad of other indescribable shapes. They sometimes appear to have faces, eyes, or mouths and are able to move or change shape. The movement exhibited can be normal human movement or it can be faster, slower, or more choppy than a normal person's gait. It is also possible for multiple shadow people to occupy one's field of vision simultaneously while acting autonomously from one another and even interacting with each other.

Shadow people are often accompanied by other coinciding effects such as delirium, paranoia, anxiety, and feelings of impending doom. They are most commonly induced under the influence of heavy dosages of deliriant compounds, such as DPH, datura, and benzydamine. However, they can also occur under the influence of stimulant psychosis, sleep deprivation, and during sleep paralysis.[4]

Although it is uncommon and not an intrinsic part of this hallucinatory effect shadow people can sometimes be accompanied by other sensory components alongside of the person's visual perception of them. This is typically infrequent and usually only occurs during very intense states of sleep deprivation, delirium, or psychosis. For example, shadow people can potentially have an accompanying "voice", despite the lack of a visible mouth structure. This auditory communication follows an identical leveling system of progressively more detailed and coherent spoken word in the same manner as a generic autonomous entity. Shadow people may converse with the person experiencing them or they may converse amongst each other, sometimes talking about the person going through the experience.

Alongside of accompanying auditory hallucinations, shadow people may also present tactile and gustatory hallucinations. This is even rarer than their potential auditory effects and typically only occurs in particularly intense and advanced hallucinatory states. Their tactile effects can be indistinguishable from a real human touch and may vary in temperature. They can also even include physical actions such as pulling of clothing, hair, or the skin.

Shadow people have been referenced throughout popular culture and time as 'demons' or 'omens', 'ghosts', or even 'inter-dimensional time travelers". This wide recognition of shadow people, combined with their representation in common culture and horror films may contribute to the prevalence of these external hallucinations. From the common internet consensus on shadow people, they are more often interpreted as ghosts or real interdimensional beings than simple hallucinations.

The shadow person as an image was portrayed in the 20th-century show "The Twilight Zone", in the appropriately titled episode "The Shadow Man"[5] where a shadow person lives under the main characters' bed. This episode was broadcast nationwide and still remains available, further exposing people to shadow people through second-hand experiences and Hollywood-style manufactured images.

The more an image is spread throughout a culture the more likely a person will manifest that image in a state such as sleep deprivation, delirium, and stimulant psychosis. The fear instilled by society and the negative connotation portrayed by mainstream culture may influence the anxiety and feelings of impending doom that people commonly report when seeing these autonomous entities. This has been investigated in relation to the common appearance of shadow people in sleep deprivation experiences.[6]

Due to the cultural influence and the perception that shadow people may in fact be "ghosts", people who experience this external hallucination may attribute it to the paranormal or other irrational causes rather than accepting that it is a natural effect of abnormal brain chemistry levels that may stem from a wide variety of mental states. The de-stigmatization of the shadow person experience and rational discussion of their true origin may grant many sufferers relief from the associated stigma of paranoia and mental illness.