A useful chart from TripSit.me which can be used to identify dangerous drug combinations quickly and easily.

Although many substances are safe on their own, they can become dangerous and even life-threatening when combined with other substances. Certain combinations may be safe in low doses of each but still increase the potential risk of death. Independent research should always be done to ensure that a combination of two or more substances is safe before consumption.

Substance related deaths most commonly occur when combining depressants. Depressants affect the parts of the nervous system responsible for breathing, and an overdose or combination of these substances can result in fatal levels of respiratory depression. Death may also occur when a victim falls into deep enough unconsciousness to aspirate on their own vomit. Lying in the recovery position can prevent one from suffocating on their own vomit. 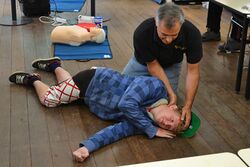 Lying in the recovery position can prevent one from inhaling their own vomit.

Another possibly fatal combination of substances are serotonergic substances, which might cause serotonin syndrome. This can also be caused alone by an overdose of said substances. Serotonin syndrome is a result of excess serotonin in the brain, which can cause seizures, anxiety, tremors, nausea, coma and possibly a deadly fever. Usually this is caused when a user has used an anti-depressant within the last 2 weeks of consuming said substance. These kind of antidepressants include monoamine oxidase inhibitors (MAOIs), serotonin reuptake inhibitors (SSRIs) and serotonin–norepinephrine reuptake inhibitors (SNRI).

NOTE: Because of the relatively high unpredictability of psychedelics, it is usually advised (especially if the person has little or no experience) to avoid mixing them with any other substance, even if the mix is considered physically safe. Even a substance like Alcohol, which tends to dull the psychedelic effects, could trigger a state of confusion which might cause the person to have a negative experience.