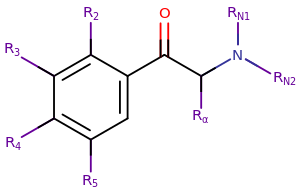 Substitutive structure of a cathinone molecule.

Substituted cathinones (also known as cathinones or synthetic cathinones) are a chemical class of psychoactive compounds that are based on the structure of cathinone. The class is composed of all the derivative compounds of cathinone which can be formed by replacing, or substituting, one or more hydrogen atoms in the cathinone core structure with substituents. Examples include MDPV, mephedrone, methylone, and a-PVP.

Cathinone is the active constituent of khat (Catha edullis), a plant whose leaves are chewed on for stimulant effect. Cathinone is closely related in structure to amphetamine, differing solely by a ketone group on the beta carbon.

The substituted cathinone class of entactogenic and stimulant drugs works via their action as a dopamine reuptake inhibitor. The agonism of this set of receptors leads to an increased rate firing of the post-synaptic neuron, triggering both cognitive and physical stimulation within the user.