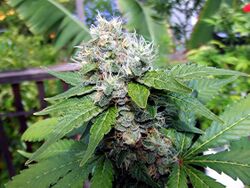 A flowering cannabis plant, the most common source of cannabinoids.

A bag of Spice brand herbal incense. This contains synthetic cannabinoids which produce a similar effect to that of cannabis.

A cannabinoid is one of a class of diverse chemical compounds that act on cannabinoid receptors on cells that alter neurotransmitter functioning in the brain. These receptor proteins include the endocannabinoids (produced naturally in the body by humans and animals),[1] the phytocannabinoids (found in cannabis and some other plants), and synthetic cannabinoids (manufactured chemically).

The most notable cannabinoid is the phytocannabinoid ∆9-tetrahydrocannabinol (THC), the primary psychoactive compound of cannabis.[2][3] Cannabidiol (CBD) is another major constituent of the plant, representing up to 40% in extracts of the plant resin.[4] There are at least 85 different cannabinoids isolated from cannabis which exhibit varied effects.[5]

Before the 1980s, it was often speculated that cannabinoids produced their physiological and behavioral effects via nonspecific interactions instead of interacting with specific receptors directly. The discovery of the first cannabinoid receptors in the 1980s helped to resolve this debate. These receptors are common in animals and have been found in mammals, birds, fish, and reptiles. At present, there are two known types of cannabinoid receptors, termed CB1 and CB2,[8] with mounting evidence of more.[9][10] However, the role of these interactions and how they result in the cannabinoid high experience continues to remain elusive.

CB1 receptors are found primarily in the brain, more specifically in the basal ganglia and in the limbic system (including the hippocampus).[11] They are also found in the cerebellum and in both male and female reproductive systems. CB1 receptors are absent in the medulla oblongata, the part of the brain stem responsible for respiratory and cardiovascular functions. Thus, there is not the risk of respiratory or cardiovascular failure that can be produced by some drugs. CB1 receptors appear to be responsible for the euphoric and anticonvulsive effects of cannabis. However, the role of these interactions and how they result in the cannabinoid high experience continues to remain elusive.

CB2 receptors are predominantly found in the immune system, or immune-derived cells[12] with the greatest density in the spleen. While found only in the peripheral nervous system, a report does indicate that CB2 is expressed by a subpopulation of microglia in the human cerebellum.[13] CB2 receptors appear to be responsible for the anti-inflammatory and possibly other therapeutic effects of cannabis.[14] However, the role of these interactions and how they result in the cannabinoid high experience continues to remain elusive.

Phytocannabinoids can be defined as any plant-derived natural product capable of either directly interacting with cannabinoid receptors or sharing chemical similarity with cannabinoids or both. The entourage effect is a proposed mechanism by which compounds present in cannabis which are largely non-psychoactive by themselves modulate the overall psychoactive effects of the plant (these resulting principally from the action of the main psychoactive component of cannabis, tetrahydrocannabinol (THC)).

Synthetic cannabinoids are any artificial compound which is functionally similar to Δ9-tetrahydrocannabinol (THC), the active principle of cannabis. Like THC, they bind to the same cannabinoid receptors in the brain and are often sold as legal alternatives.

Unlike cannabis, there have been multiple deaths[24][25][26][27][28][29][30] associated with the repeated abuse of synthetic cannabinoids as well as serious side effects resulting from its long-term use.[31][32][33] Therefore, it is strongly discouraged to take this substance for extended periods of time or in excessive doses. Compared to cannabis and its active cannabinoid THC, the adverse effects are often much more severe and can include high blood pressure, increased heart rate, heart attacks,[34][35] agitation,[36] vomiting,[37][38][39] hallucinations,[40] psychosis,[41][42][36][43] seizures,[44][45][46] and convulsions[47][48] as well as many others. Sixteen cases of acute kidney injury resulting from synthetic cannabinoid abuse have been reported.[49] JWH-018 has also been associated with strokes in two healthy adults.[50]

It should be noted that pre-mixed, branded blends (like Spice and K2) are more dangerous than pure powder because the specific chemicals and dosages are usually unlisted as well as the potential of inconsistent areas of dense powder, leading to an overdose. As synthetic cannabinoids are active in the milligram range (with below 5mg being a common dose), it is important to use proper precautions when dosing to avoid a negative experience.

Like THC, prolonged usage of synthetic cannabinoids may increase one's disposition to mental illness and psychosis[42], particularly in vulnerable individuals with risk factors for psychotic illnesses (like a past or family history of schizophrenia).[51][52][36] It is recommended that individuals with risk factors for psychotic disorders not use synthetic cannabinoids.[53]

It is strongly recommended that one use harm reduction practices when using these drugs.

Please be aware that pre-mixed, branded blends are unreliable as they often fail to list the constituents and dosages. Many people have been hospitalised or suffered negative symptoms believing they are comparable to cannabis in potency and effects. This is not the case, and they should be avoided in favour of pure analytical samples where possible.

For a comprehensive list of known synthetic cannabinoid derivatives, /r/Drugs/wiki has published a respectable directory of names and links to further information.