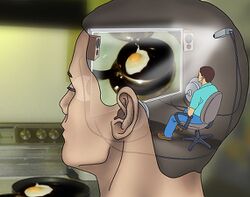 An artistic replication of what it feels like to experience watching the world through a screen.

Derealization or derealisation (sometimes abbreviated as DR) is medically recognized as the experience of feeling detached from, and as if one is an outside observer of, one's surroundings.[1][2] This effect is characterized by the individual feeling as if they are in a fog, dream, bubble, or something watched through a screen,[3] like a film or video game.[4] These feelings instill the person with a sensation of alienation and distance from those around them.

Derealization is often accompanied by various perceptual distortions such as visual acuity suppression, visual acuity enhancement, and perspective distortions.[4] Other coinciding effects include auditory distortions and depersonalization.[3][4] This effect is most commonly induced under the influence of moderate dosages of dissociative compounds, such as ketamine, PCP, and DXM. However, it can also occur to a lesser extent during the withdrawal symptoms of stimulants and depressants.

In psychiatry, chronic derealization that arises during sobriety is identified as "Depersonalization/Derealization Disorder" and is classified by both the DSM5 and ICD-11 as a single dissociative disorder.[2][4]

Temporary derealization symptoms lasting hours to days are common in the general population. Approximately one-half of all adults have experienced at least one episode of depersonalization/derealization within their lifetime, and the gender ratio for the disorder is 1:1.[4] Chronic derealization is more common within individuals who have experienced a severe trauma or prolonged stress and anxiety. The symptoms of both chronic derealization and depersonalization are common within the general population, with a lifetime prevalence of up to 26-74% and 31–66% at the time of a traumatic event.[5]

This effect is a type of cognitive and perceptual dysregulation.[1] It has been demonstrated that derealization may be caused by a dysfunction within the brains visual processing center (occipital lobe) or the temporal lobe, which is used for processing the meaning of sensory input, language comprehension, and emotion association.[6]