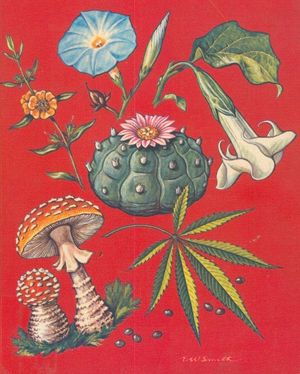 Artwork from the cover of Hallucinogenic Plants (A Golden Guide)

Naturally occurring sources refers to psychoactive chemicals or their precursors that already exist in nature. This is in contrast to synthetic psychoactive compounds which are artificially produced or designed in laboratories. These natural chemicals can often be reproduced synthetically as well, though notably they appear in nature or through human cultivation.

There are a variety of proposed reasons for the appearance of psychoactive substances in organisms including the following examples:

Selective breeding is a method used by cultivators to add or remove traits from successive generations of organisms by breeding together those that have the preferred properties in hopes of developing a desirable genetic strain. This may have resulted in both the potency and appearance of psychoactive substance(s) which the cultivators wished to produce.[1]

Another proposed reason for the presence of psychoactive substances in nature is their use as a defence mechanism. Through natural selection an organism may develop a poison or toxin useful for fending off predators,[2] as can be seen in Latrodectus Spiders who's psychoactive Latrotoxin has no reward value, and instead poses a threat to others.

It is also possible that co-evolution encouraged psychoactive organisms to appear as a means of propagation. That is; in the same way sweet fruits were naturally selected by animals spreading their contained seeds, so were psychoactive flora that posed some benefit to the animals.[3]

An incidental cause of the prevalence of these substances is the shared genetic origins of the organisms. Given that they share a great deal of genetic code it is reasonable to assume that this may have been a factor in producing chemicals similar enough to neurotransmitters so as to activate receptor sites. For example many psychoactive chemicals are biosynthesized from amino acids such as tryptophan, while in humans this amino acid is used to make serotonin. The result is that some of the tryptamines in nature are serotonergic agonists when consumed.

The use of psychoactive substances is deeply rooted in human culture and dates back to pre-history. Early societies often incorporated these organisms into their traditions in medicine, spirituality, or recreation, such as the use of soma in the origins of Hinduism, and many of these uses continue into the modern day. Some common examples of this are the use of wine containing Ethanol in Christian communion, and Ayahuasca among indigenous peoples of the Amazon.

Many of these organisms have been instrumental to the progress of various scientific fields, such as Biology, Medicine, Psychonautics, and continue to reveal their importance with their involvement in major discoveries, such as the discovery of cannabinoid receptors[4] preceding our knowledge of endocannabinoids.[5]

Precluding endogenous chemicals, many of these organisms served as humanities only means of altering neurochemistry until the advent of synthetic psychoactives during the modern age. They have been at the forefront of major historical developments, such as pharmacotherapy, the funding of organized crime, the psychedelic era of the 60's, and the current "War on Drugs".

Below is an index of articles regarding natural sources of psychoactive substances. Other than inanimate sources they are categorized by kingdom of organism with sections for each applicable class of psychoactivity, sub-sections are given to active constituents, and finally the taxonomy and common name. Names may appear more than once if they contain a variety of substances, or their active substance has a variety of effects. Please note the quantity of substance obtained through an organism is not always safe and/or effective at common levels of consumption, but they are here included for sake of completeness. In addition some of the organisms are toxic or dangerous and thus proper research and preparation is recommended before attempting to personally investigate their activity.