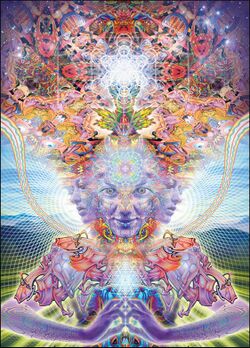 Namaste (Trifoliata Mystica) by Luke Brown - This artwork serves as an accurate example of a generic geometry-based autonomous entity seen during a psychedelic experience.

An autonomous entity is defined as the experience of perceived contact with beings which appear to be sentient and autonomous in their behaviour.[1][2][3][4][5][6][7][8] These entities can manifest within both external and internal hallucinations.[7]

Autonomous entities will frequently act as the inhabitants of a perceived independent reality.[6] Although many entities seem largely unaware of a person’s presence they are often precognizant of a person's appearance into their realm and usually choose to interact with them in various ways.

The behaviour of a typical entity can vary wildly and seems to depend heavily on one's current emotional state. For example, while many entities will act as loving beings, teachers, or healers in certain contexts they are equally capable of acting as indifferent, uncaring or even as malicious tormentors.[3][8]

Entities can take any form but subconscious archetypes are present and commonly include:[3][8]

This experience is often accompanied by other coinciding effects such as geometry,[4] internal hallucinations and delusions. It is most commonly induced under the influence of heavy dosages of hallucinogenic compounds, such as psychedelics, dissociatives, and deliriants. However, it can also occur under the influence of stimulant psychosis, sleep deprivation, and during dreams.

Debate over the existence of autonomous entities

The question of whether these autonomous entities are real or not has often been subject of discussion.

Assuming that our consciousness is formed by a complex and specific arrangement of neural networks, they can be said to be a consequence of the emergent properties of our brain. These perceived entities could be generated by transient changes in brain connectivity induced by certain substances.

For example, an increase in functional connectivity between or inside certain areas of the brain could cause a higher likelihood of the formation of various separated complex structures, which in some cases could be complex enough to be perceived as self-conscious or even have (or give the illusion to have) a higher intelligence than the perceiver.

This would mean that these entities, even though most of the times perceived as separated from our Self, are complex structures emerged by changes in our neural pathways. In a certain way they would be as real as we define ourselves to be (as a "conscious" being), because both our consciousness and the entities are formed by specific complex structures inside the brain. The same argument could be used in many other cases with other kinds of hallucinations and could even lead to the questioning of the definition of reality itself.

Another common hypothesis is that these entities already exist inside our subconscious and/or unconscious and are perceived by the conscious part of the brain due to an abnormal change in connectivity. The presence of certain entities within the unconscious has been widely discussed even in classic psychological literature. For example some of the archetypes hypothesized by Carl Gustav Jung were described as self-conscious entities.

These two hypothesis do not appear to be in conflict with each other, since the presence of innate entities within the psyche and the momentary or permanent formation of others do not exclude each other.

There are several distinct personality types of autonomous entity which one may potentially encounter. They are often perceived to represent a particular subsection of a person’s own consciousness and can be identified primarily through their personality, but also their appearance. These individual types are broken down into three separate categories below:

Autonomous entities can communicate with a person via a combination of spoken word, “telepathy”, conceptual thoughts, mathematics, and geometry-based visual linguistics which generally consists of morphing colored structures of different textures that are innately understandable as representations of specific concepts. They will often convey insights regarding overcoming personal issues within a person’s life and will occasionally help clarify philosophical or spiritual ideas. However, more often than not entities are very likely to speak in a cryptic or nonsensical manner which seems to have no clear meaning behind it.

It is important to note that autonomous entities can never convey novel information to the person experiencing them. For example, they cannot provide insights about the external world which a person did not already know on some level. Instead, they can only provide alternative perspectives and help build upon existing ideas. This is presumably because autonomous entities do not have access to any knowledge which is not already contained within one's conscious or subconscious memories. May contain imprints of genetic memories, access to lifetimes that seem parallel or events that mirror one's connectivity moving past the default mode.

When communicated with through spoken word, the level of coherency in which these entities can communicate with is highly variable but can be broken down into four distinct levels. These are described and listed below:

The specific differences between each potential style of autonomous entity can be broken down into the following variations: